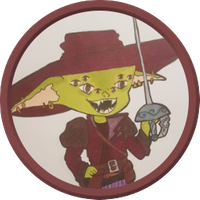 The Gift and the Green

Art: NariKins (Tip her on Kofi)

Chuckles lived in a nest together with his lin, his community. Every gob was expected to contribute to the nest's survival, which usually involved taking supplies from passing travellers and the nearby human settlement. His lin mostly saw the humans as an easy source of food, but Chuckles was curious about the humans. His elders chastised him for his curiosity. They warned him about their vicious ways, saying "They will murder you before you've even had a chance to speak. It is better to strike first, then run!"

But even their views were changed when a human child was discovered at the entrance to the nest. The elders believed her to be a truce offering from the humans, given to live as one of their own. They accepted her and named her Nying, which means "gift" in the Goblin tongue.

Chuckles was intrigued by the human girl. She was nearly his age. He made efforts to help her overcome her fear of her new lin. He knew the feeling well. In truth, Chuckles sometimes felt like the odd one out. From a young age Chuckles had some magical talent. With a gesture, he was able to perform small illusions. His illusions had tricked humans and goblins alike. For this reason his lin had treated him differently, even unkindly at times. Nying didn't treat Chuckles that way. She was curious and friendly towards him. When reading stories together, from books taken from travelers, Chuckles would create illusions to accompany the tale. Nying loved it! And Chuckles loved surprising her, making her smile and laugh.

Sometimes he would become so lost in those stories. As he watched his illusions bloom and fade before him, Chuckles began to dream of becoming an adventurer himself. He imagined the fame and fortune. He longed for a day when he could proudly show Nying all his many achievements. It quickly became his ambition to live the tales himself. On his 13th birthday, Chuckles left the nest. He promised Nying he would return one day with glorious tales, riches, mountains of food, and safety for their lin. It was a sad day when he left them behind, but with each step his wanderlust and excitement grew within him.

Luck was on his side. When he came to the nest entrance he discovered a dead traveller with fancy clothes and an instrument. Chuckles chose this as his disguise in order to blend in with "civilization". An onlooker may have found this "disguise" rather amusing, since the clothes were far too big for Chuckles. However with luck, illusions, and charm, he succeeded in infiltrating human civilization. He had the clothes refitted, apart from his hat since he loved the size and shape of it.

He focused on improving his musical talent, both with the instrument and singing. For a long time when he played, people clapped their hands around their ears, even paid him to stop! But Chuckles kept on practicing and hoping for a time when he could perform and no one would tell him to stop. He survived for a while by scavenging for scraps and dodging people who asked too many questions or seemed like they would cause trouble for him.

One of Chuckles biggest hurdles was understanding the concept of ownership. Back in the nest everything was shared. If someone wasn't using something, they clearly didn't need it. He discussed it with the drunk patrons at the tavern where he had played. After these discussions some people would seemingly have an epiphany, saying they finally understood goblins. Other times he was met with hostility, people said his logic was preposterous and nonsensical. From the hostile interactions Chuckles learned he could not always speak his mind, but he often found it difficult to discern when to keep his mouth shut.

I can tell you all the different flavours of monk. Want to hear? Okay, Sun Soul...

But... why would you demand that I kill you when the time comes? That's so sad...

Why would people condemn you just because you're a Changeling? that's silly, as silly as hating goblins!