Deliberations of a Merc (Nissa Waywocket) 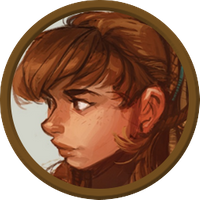 The sharp end of the Stick

Art: Unknown artist (contact me if you know who made it, so that I can give them credit)

With new bruises on her knees and elbows several times a week, and quite the attitude to go with it, her father knew that he had to be quite strict with her, and teach her proper respect, manners, patience and most importantly, when to hold her tongue.

She only grew rowdier with age, with a penchant for getting into trouble and not letting remarks about her go unpunished, it started becoming a problem and her father saw no other option than to throw her into the midst of military service to straighten her up.

Accompanied by her younger brother, she quickly learned how to wield a blade and mend her armor, while her brother struggled to wield anything but a crossbow. It wasn't that she hadn't listened and learned what her father had been teaching her over the years, she simply hadn't felt like the people she met, were worth the effort, since they usually started off giving her a look like they, by just a glance, could tell who she was and how she was. But in this place, she learned to utlize it, showing much restraint, biting her tongue and not talk back to her superiors, mostly...

She made friends through all the struggles and training they were put through, and they became a small band of troublemakers in the unit they were in. Her brother tried to fit in, but he was still struggling, having been moved off to the backline, doing support and cooking for the frontliners, with the rare chance to prove himself with his crossbow. He didn't mind being a bit of a gopher for Nissa and her group, he liked hearing their banter and how Nissa looked to be in her element, laughing wholeheartedly. In the end, they hardened up and became a trusted group for all kinds of jobs, no matter how gritty. Nissa lived day by day, not thinking ahead, relishing in the fact that she had met people who she could see eye to eye with, people who she could talk openly with, with crude jokes and perverted statements as much as she liked and no one to judge her.

One morning during field training, she was awoken by her unit running at her while yelling. "Your brother went into the Spider Lair and hasn't returned!", confused by these words, she sprung to her feet and grabbed her equipment and rushed off. "Why would he go to the spider lair? he's not even supposed to be out here!", her mind raced as they reached the lair, met with a group she knew all too well. They smirked at Nissa as they continued to walk away, "FUCKING BLANCO'S MEN!?".

Her unit knew that there was no stopping her from charging in, and therefore joined her, following the trail until they saw a large shape in the darkness in front of them. A huge spider had caught and paralyzed her brother with its venom and was preparing to transport him, covering him in webs. They could've caught the spider by surprise, if it hadn't been for Nissa's desperate scream as she flung herself at the spider, slashing open the side of it with her morningstar. A harsh battle ensued and things were starting to look grim, when a bolt suddenly flew past Nissa and directly into the thorax of the spider, killing it, her brother gasped and lost his grip on the crossbow.

They all survived, somehow, but it hadn't come without cost. Three of her five friends had sustained permanent damage, one had lost an eye, another had lost his arm and the third, lost a leg and half of his guts. Their mercenary days looked to be over, but her brother lived and she couldn't be more thankful. The medics said that the poison wasn't lethal and that he would be able to move soon, but both his legs had been mangled.

She took her brother home, afraid to look her father in the eyes, but when he saw them, he hugged them as if he'd never let them go again. She took a leave and cared for her brother, who seemed to deal with it all better than she was. He had always felt out of place and like a drag on Nissa, since she always had to watch over him. "Now you can go all out, Nissa!" he'd laugh, but Nissa couldn't smile about it, she hadn't thought that he was a drag, to be honest, she hadn't given anything much thought for years, she had been busy just enjoying the freedom to be herself. While her brother recovered, she learned why he had gone there, he had gotten an urgent message that Nissa needed supplies and that it was a matter of life or death.

The message had been lost in the commotion and nothing could be proven unless it all got sent to a higher court with a zone of truth, until then, it would've been nothing but claim against claim. And for that, the matter had been too small and unimportant for the people in charge. In the end, she couldn't even be sure if it had been Blanco, but what was his men doing outside the lair? why didn't they help?

A year later, she had turned 23 and returned to her mercenary work, driven like never before. Doing what she was best at, while using it as an outlet for her frustrations. But in the back of her mind, she was still brooding over every possible scenario, motive. Eventually it all turned numb and she didn't even realise it anymore, life was flying past and she was fighting where, when and how she was told to fight. Before she realised it, she had turned 45 and she was the last active member of her old unit.

Something inside of her clicked and she realised, it was her, she was doing this, but how was she doing it?.

She stopped and looked at her hands, as she tried to make sense of everything, a ping in her head suddenly went off. The door was about to be burst open and fly at where she was standing, but how did she know? It was happening less than a second after she felt it and she dodged.

"NISSA, ARE YOU OKAY?!", was heard from the door, as a big dragonborn ran in with weapons drawn, "I HEARD AN EXPLOSION! WHA-", he barely got to see the naked gnome body that flew at him as a fist connected to his jaw and sent him flying out of her room again. "OUT! I'M NOT DRESSED AND YOU'RE NOT THAT LUCKY!", Nissa yelled at him as she scrambled to pick up her clothes and throw it on as quickly as she could...