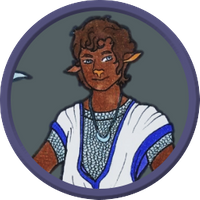 Art: NariKins (Tip her on Kofi)

They hadn't yet turned 9, when they met upon a travelling cleric, journeying through the forest and somehow the wildlife seemed overjoyed at this cleric's presence. The young firbolg couldn't help but be intrigued by him and one night, when the cleric was resting at a small bonfire, they approached and asked to hear who he was and how his presence seemed to be a positive to things around him. The night passed as the traveller talked many a tale about himself, a horrid past, a chance at redemption and a dedication to the journey of life under Sêlune.

The firbolg continued to be enthralled by the warm smile, welcoming arms and fantastic tales, it wasn't until months had passed, that they realised that they were no longer in their forest, nor had they been for a long while. They took the name Elaneiros and the cleric had jokingly claimed that it was too hard to pronounce, so that he would simply call them Ela. Ela didn't mind, a name was just to make things simpler for people around them anyways, but they liked when the man said it.

For years they travelled, and Ela continued to be amazed by this man's warmth and smiles even towards people who hurt them or threatened to do so. There was always room by their bonfire, enough food for visitors and a helping hand for the wounded or diseased. It wasn't until one day, when they got attacked by a small band of brigands, that Ela understood that the warmth and smile, didn't prevent the cleric from killing his foes and protecting the ones around him through force. It was unsettling at first, to see this beloved and heartwarming man, swiftly end the lives of a handful of people in mere seconds, still with his warm smile on his face.

When Ela later had asked him about this encounter, they were surprised by the calm logic of the man and they understood his conviction, that eventually became their own.

That "Everyone is on a journey, through life and unto death, we will all be judged in the end and the harshest judge is ourselves. We all carry the weight of our actions throughout life unto our last journey in the afterlife. I, myself, will be judged and I will carry much once my times comes, but I did my best at what I believed was right, and so did they. At the very least, I have cut short the increasing load they were making for themselves in their last journey, a blessing in disguise, and now Sêlune looks over them.". Ela pondered upon these words for years and made them their own, as they took on the mantle and began travelling under Sêlune in earnest.

The cleric smiled with joy at Ela, having acknowledged their understanding of the teachings and philosophies. As each person under the moon has their own journey, it had become time for their joint journey to end and for Ela to go their own way. Ela smiled with the warmest smile they had learned from watching the man over the last decade, while tears fell down their face, "May your journey be blessed and may the Nightmother guide you onwards to where you need to be.", these were the last words they spoke to each other before they both continued their travels in opposite directions...