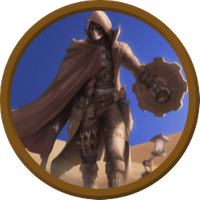 Art: ? (contact me if you know who made it, so that I can give them credit)

Unit 5-3-1 has made curious progress in a direction, one that it wasn't intended for. Although designed for our frontlines in the big war, it seems that our tweaks towards more multi-purpose warforged, has yielded a peculiar result and we will continue to study this for as long as it shows potential.

Upon activation, it immediately started gathering its weapons and gear, but it didn't stop there, it continued over to the Artificers and grabbed several of their tools, seemingly judging them and began hammering away on materials nearby. At first, we believed it might be malfunctioning, but it quickly became obvious to us, that this unit had the spark of creativity in it, we observed with much interest as it insisted on assisting the artificers in making other Warforged and showed talent in artificing.

We add this to the records, well aware of the morbid irony of this unit, possibly being able to create other Warforged in the future.

While the unit had seemingly lost a bit of efficiency in direct combat, it was making up for it with supportive magic and intelligence. Frontline assault capability, mixed with medical capability not only for other Warforged, but for our brethren of flesh as well.

We are looking forward to seeing it become a full-fledged Artificer, as its potential will only grow from here.

Addendum - We have decided to proceed with creating more of this unit, even though its creative spark seems to slightly influence its single-mindedness in following orders. It has been given its designation and shall henceforth be knows as C7F3U531, it's a good fit for the capabilities of 5-3-1, as Chapter 7's 3rd Faction utilize a multitude of races and strategies in combat.

Second Addendum - The project has been forcibly shut down due to the war ending. We hope to be allowed to continue this direction, but it seems doubtful. Unit 5-3-1 is still the only Warforged of his line to exhibit what had sparked our interest, is it a different hint of self, personality? I will continue to observe the unit and hopefully get some answers.